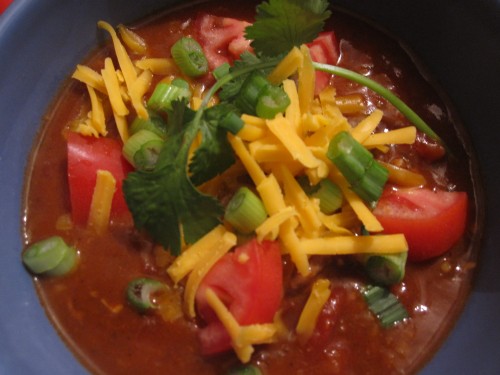 OK I know what you’re thinking… another chili recipe?!@? Yeah, but this one is really really good. I’m a big chili fan and always keep my eye out for variations. This one has cinnamon and cloves in it along with more traditional chili seasonings and almost has an Indian-esque flavor to it. It also has beer in it 🙂 We both really loved this one. Really. 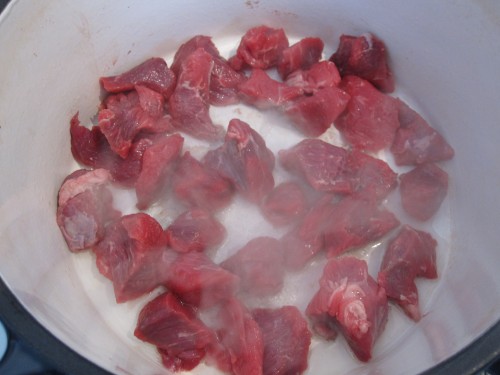 It all starts with some boneless beef chuck. I found some pre-cut cubes at the store and it was priced per pound about the same as the whole cut of meat. It was already trimmed and cut up, which was a nice time and energy saver for me.

I’ve started to cook 3-4 meals on Sundays for us for the week, so any corners I can cut are greatly appreciated.

Start by browning 1/3 of the meat at a time. I cooked the chili in our dutch oven, but a large pot will do just the same. Just make sure you have a lid for it. 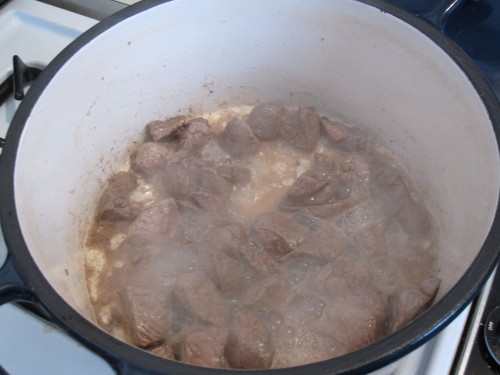 Set aside each third as you go.

The meat is rather chewy at this time, but will become tender after hours of cooking.

Once all the meat is cooked, drain the fat. The original recipe does not have you drain the fat but then has you chill the chili overnight and scrape off the fat before reheating and serving. We planned to have the chili the night I made it so I just cut out the fat right from the get-go and it worked out just fine.

After removing the fat from the pot, add a little oil and saute the onion. You can see there are still some “brown bits” that remain in the pan so you still get the lovely flavor from the cooked meat.

After these cook for about 8-10 minutes, add a whole head of chopped garlic. I definitely had to read that twice- a whole head! 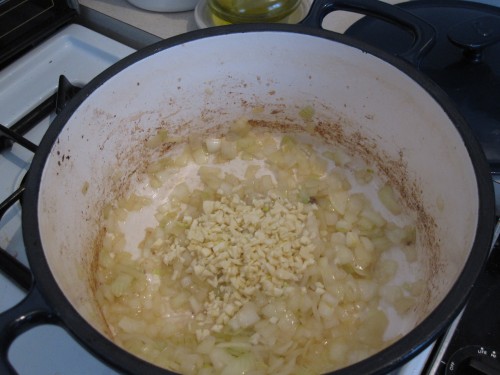 Cook for another minute and then add the seasonings. The recipe called for ground ancho chilis. I couldn’t find this at GE (or the spice aisle for that matter with all the remodeling going on!) so I substituted chili powder and cayenne. I also didn’t have allspice so I used some nutmeg.

Cook for another minute. Toasting the spices really brings out their flavors. It also creates quite a mess in there. To get up all the browned bits add beer. The recipe calls for dark beer but all we had was the king of beers. 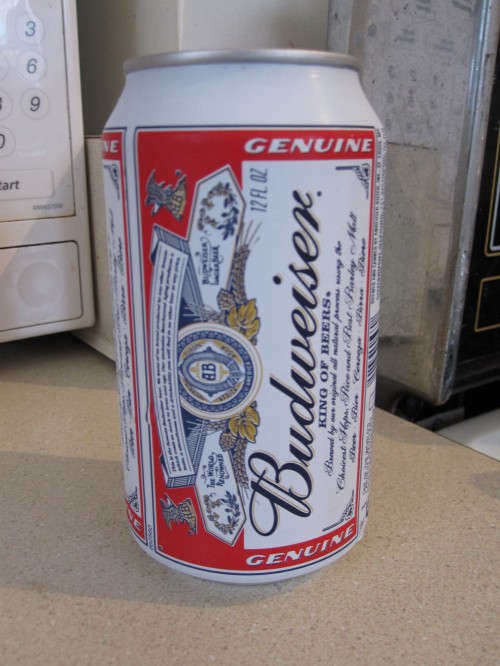 Add all 12 ounces of the beer and scrape up any brown bits.

Return the beef to the pot along with tomatoes, water, oregano and salt. Stir.

Cover with a lid slightly ajar. Now it’s ready to simmer for about 2 hours.

It was super good!!!

One response to “Chili con Carne (The Best Chili Ever)”