These drinks were inspired by fresh farmer’s market summer fruits!  They were also inspired by our dislike of premade daquiri mixers and frozen canisters.  They end up being so syrupy and overly sweet.  So we made some of our own homemade daquiris with all natural ingredients that were easily interchangeable.

This was a watermelon bourbon one. 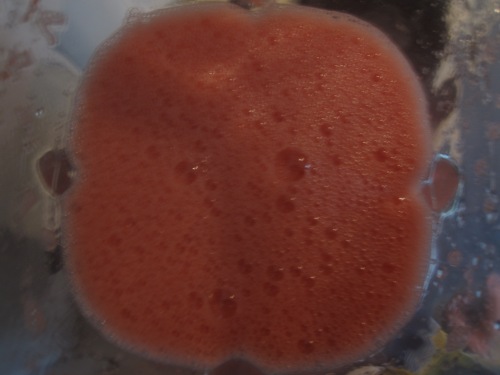 We also made strawberry with rum, and a strawberry and peach combo with bourbon.  No combination turned out poorly and the possibilities were exciting.

They were great, easy, refreshing, and much better than the store bought mixers.  Take advantage while the summer fruits last!

So my last venture into the world of dessert making was rather unsuccessful 😦 However, I remained determined and think I might have nailed down a great tiramisu recipe! Although I followed a similar recipe to last time, it just looked better at each step. I also added homemade whipped cream which helped a lot in terms of getting that “fluffy” filling that I have come to expect in my tiramisu!

I started off by beating the egg yolks for several minutes until they were lemony yellow and thick. I then continued to beat them over a double boiler for almost ten minutes.  After that, I let them cool for a few minutes and then added the marscapone… already looking much thicker than last time!

I then whipped heavy cream (1st time doing this!)

Then combined the two.

I got my station all set up here.

I used a smaller, but taller dish this time. 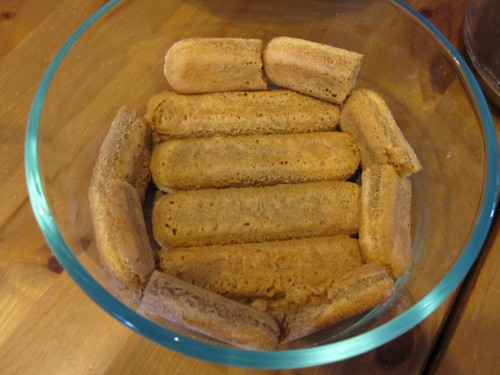 topped with half of the cheese/whipped cream mixture

the view from the top

I then just repeated with another layer of dipped lady fingers and the remaining cheese/cream mixture. 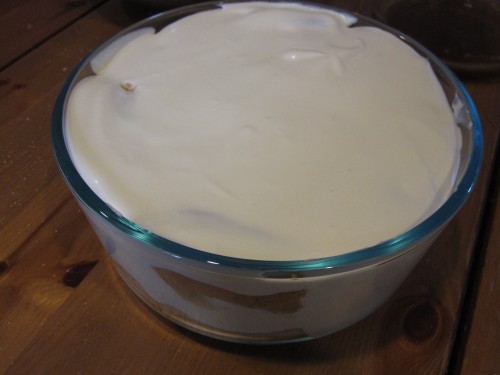 After several hours in the fridge and a chocolate dusting it was ready to eat! 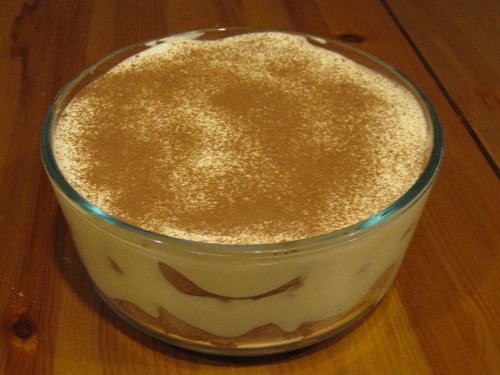 It was still a little soupy when it was time for serving, but we weren’t too interested in waiting any longer 🙂

After a couple of days in the fridge it held together much nicer…I would suggest refrigerating it overnight before serving to guests. If the way it looks is not important to you, then no need to wait!

Overall, I was much more happy with the way it turned out this time than last. I still learned some more things this time around (like I probably could have whipped the cream a little more) and that will make the next one even better.  I still have more lady fingers, so attempt #3 should be pretty soon…

I rarely make desserts, but I wanted to give tiramisu a try. As I began the research process I was already a bit overwhelmed because there are literally hundreds of variations and recipes out there. I looked through A LOT of recipes and decided to go with two recipes that were fairly similar. One was from Giada De Laurentiis and the other one I found somewhere else on the internet (?). I integrated the second recipe because it was very similar to Giada’s (which I already had all the ingredients for and there was 30 inches of snow on the ground) and because it directed me to cook the egg yolks, which Giada did not. I was bringing this tiramisu to a Superbowl party and I did not want to make anyone sick, so I decided to combine the recipes to make sure I cooked the eggs properly.

It all started off ok…

I first separated the egg yolks from the whites. 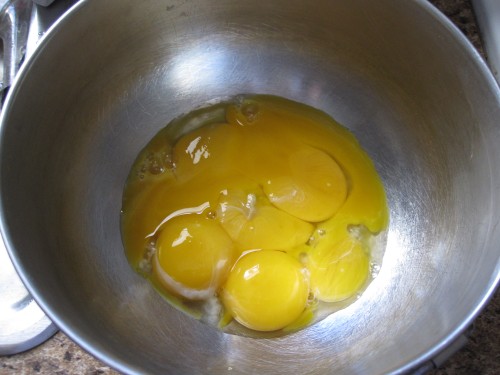 Next I added the sugar. 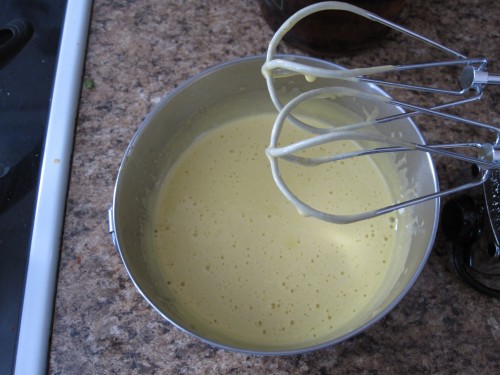 Since this process heated (cooked?) the egg/sugar mixture, I placed it in the fridge to cool before I beat in the marscapone cheese. I took this time to set up the other ingredients. In all of my recipe digging, I learned that it was very important to use authentic ingredients, including savoiardi lady fingers, marscapone, and Italian espresso.I never used marscapone before and it’s American equivalent is supposedly cream cheese. I found the texture to be way more gooey than cream cheese, but many recipes say you can substitute for it. 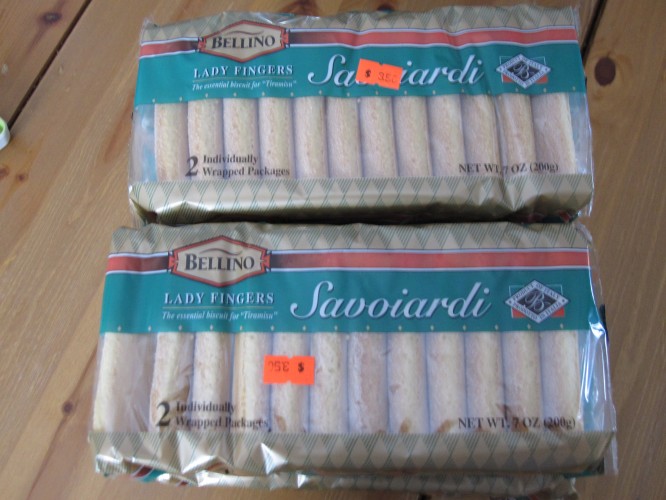 Once the eggs were cooled, I mixed in the marscapone cheese. 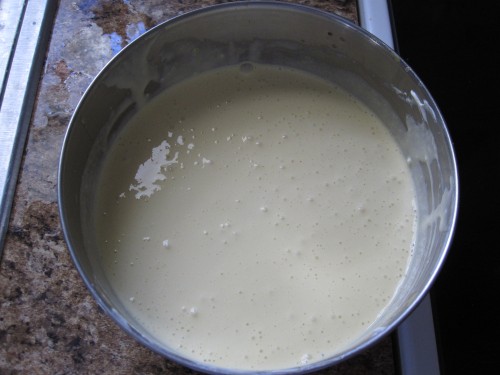 This mixture was not only the filling, but also the topping. It tasted really good, but as you can see the texture is not right. It’s not fluffy enough. Many other recipes integrated whipped cream at this point and now I know why. I didn’t have any whipping cream so I just went with what I had (and what the recipes I had told me to do). I poured it over a layer of espresso/rum soaked lady fingers with hopes that maybe the cheese filling would fluff up in the fridge. 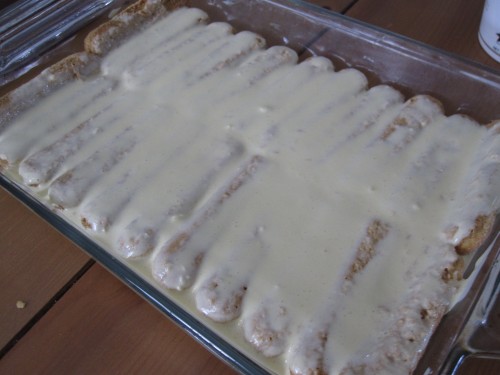 I refrigerated it for a couple of hours, but it didn’t fluff up at all 😦 I was pretty dismayed because it doesn’t look like tiramisu, or at least what I am used to seeing. I went ahead and added the chocolate powder (and later added shavings) anyway and continued to refrigerate it, hoping, hoping, hoping, but to no avail. This is what it ended up looking like. 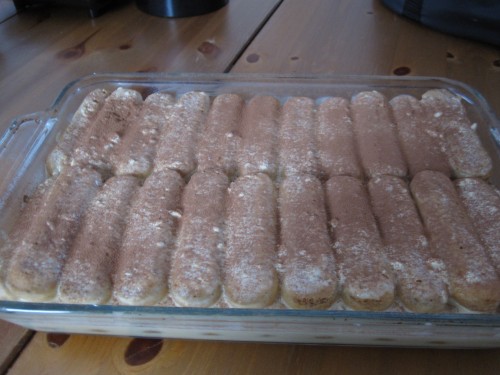 It ended up tasting ok, but the texture was off and obviously it didn’t look right either. I learned a lot from this initial effort though and next time I make it I will definitely work off of a recipe that includes whipped cream or egg whites, or something to fluff it up!  I bought too many lady fingers, so the next attempt may be sooner than later. I will keep you posted!