A friend was coming over and I wanted to make a little afternoon snack.  It wasn’t too hot out so I didn’t mind baking something.  I started by pan sauteing some cubed chicken breast with some salt and pepper and putting it in the crocks.

I started on the sauce by sauteing the aromatics in oil.

Browned garlic is the key for this one

I sauteed the aromatics a little longer than usual to really brown the garlic and get a deep almost smoky garlic taste.

Once the garlic was browned enough, I added some fresh basil for the last few minutes of sauteeing.

Then add the rest of the sauce ingredients which is basically an alfredo.  The cheese was grated imported Romano which we got in the Strip District for $6.99 a pound.  What the Strip provides is amazing and limitless!

Then pour the sauce over the chicken until covered.

Add a bit of mozzarella and throw into the oven at 350 for about 15-20 minutes or until browned.

Top with some fresh basil and chopped tomatoes.

For two people who really enjoy eating tomato sauce, I knew it was only a matter of time before we began to make our own. Coupled with a new-found desire to eat natural foods and stay away from unknown ingredients/chemicals and the fact that homemade things just tastes better than store bought, we ventured down the path of creating our own marinara. We created a very basic marinara, which leaves a lot of room for creativity going forward. For now though, it was a few simple ingredients simmering in low heat for all of a Sunday afternoon that stole the show.

I started the sauce off with some chopped onions and carrots (which, in retrospect I probably should have grated the carrots) and of course, a good amount of garlic. I sauteed all of these ingredients (carrots and onions first, then garlic) in extra virgin olive oil in the dutch oven.

I then added some canned tomatoes.  3 big cans (32-oz.) to be exact, 2 cans of crushed tomatoes and 1 can of chopped to be even more exact 🙂 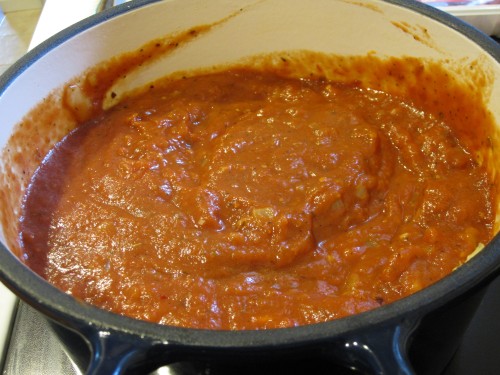 I put the lid on and put the pot into a 300 degree oven for about two hours.

During that time, I also made my spaghetti squash and the meatballs.  Two things I love very dearly at this point!

After the two hours had passed (stirring about every 1/2 hour or so) I turned the heat down to 200 degrees and let the sauce continue to simmer.

When it was nearly done and I was ready to add my mostly cooked meatballs, I added some freshly torn basil.

In went the meatballs and the sauce returned to the oven for another 1/2 hour.

You can see how the addition of the meatballs dilutes the sauce a bit, but in a good way!

Greg also wanted to make an alfredo sauce for this meal. He used our previous recipe for this sauce, but added some fresh parsley and used only one type of cheese, parmesan, I believe.

This sauce is so amazing, but can be very heavy. I opted out of having the alfredo this time around (after several spoonfuls to make sure it was ok during the cooking process though 😉 ) 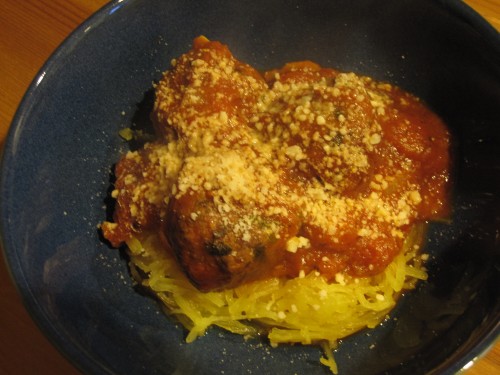 With or without the alfredo this meal was awesome and it was nice to make my own Sunday gravy.

It’s nice to have options too and a little of the alfredo sauce can go a long way. Greg likened the combo to a rose sauce.

The cool thing about making our own sauce was that there was a good amount leftover. I threw it in a tupperware and into the freezer for another meal at a later time. If you have the time, this is the way to go!