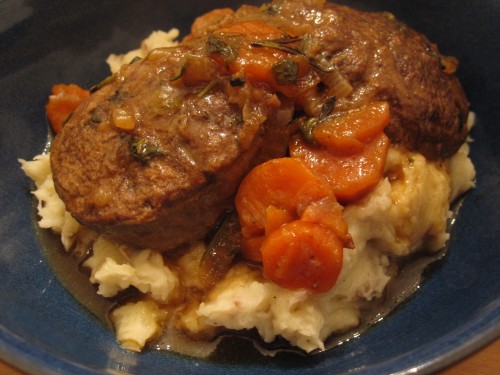 For St. Patty’s day I made an Irish beer beef stew. Originally I wanted to make  stout braised short-ribs, but it turns out short-ribs were a little more pricey than I originally thought. We ended up purchasing a single bottle of Smithwick’s (an Irish red ale) and some beef shanks and enjoyed every bite.

I searched a few recipes online and got a basic of idea of how I wanted to make this and just sort of winged it from there. As such, my measurements and things may be a little off, if following this exactly, but it was so liberating cooking without a recipe! I loved it. More or less, here are the steps I took.

I chopped some fresh thyme and added it to some whole wheat flour and seasoned it with salt and pepper (all purpose flour would work just as well).

Meanwhile I added some oil to my Staub coccette and put it on low heat. Once that was nice and hot, I sauteed some onion and carrots (1 medium yellow onion and 2 carrots).

Next, I wanted to sear each shank. In retrospect I could have done this in another pan or I could have removed the carrots and onion. What I did was move the carrots/onion mixture to the side so I had some surface area of the bottom of the coccette to work with. Once I was done searing a shank I would put it on top of the onions/carrots.

I seared them for about 1-2 minutes per side, just to get them browned (not to cook through).

Next, to get those nice brown bits off the bottom of the pan I poured in the bottle of smithwick’s. Any beer will do really. 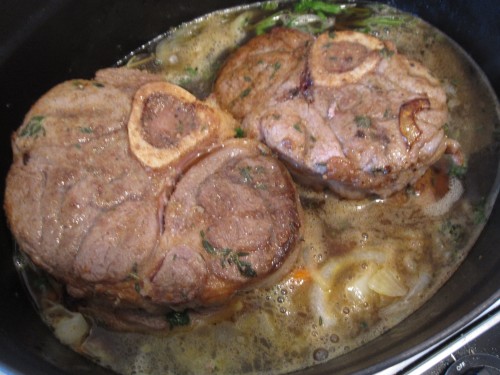 Next, I added some chopped fresh parsley and rosemary and about 1-2 cups of beef broth (enough to cover all the pieces of meat). 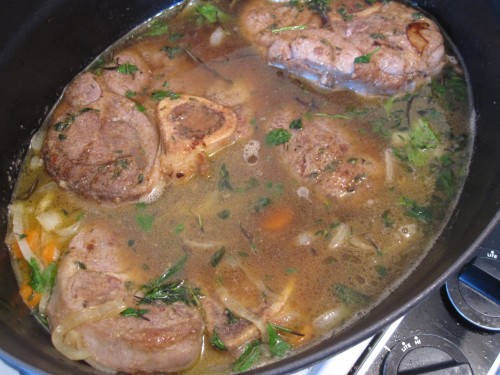 I then put the lid on the Staub and placed it in a 315 degree oven for about 2 hours. 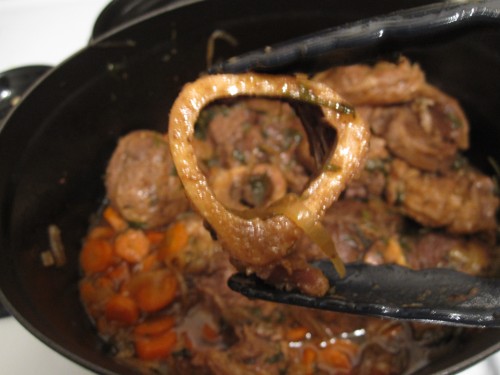 At this point I knew it was done!

I wanted to make a thick, rich gravy to pour over each serving. I poured the braising liquid into a saucepan and set it to high, allowing some of the water to boil off. 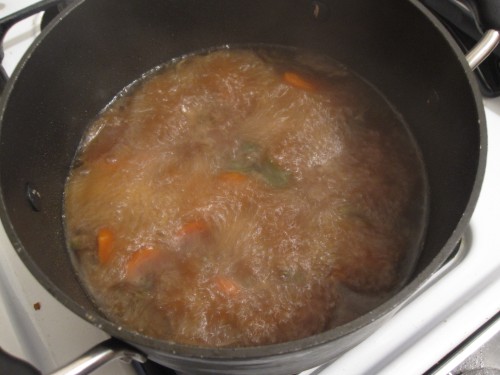 We placed the meat over some roasted garlic mashed potatoes and poured the gravy over everything. 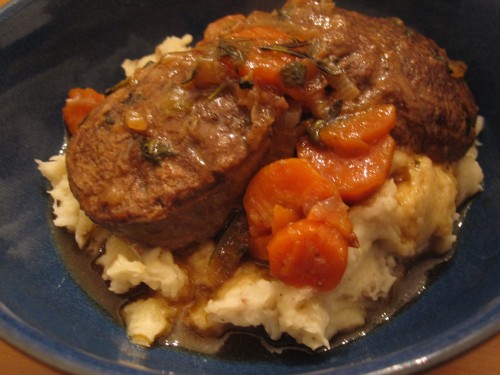 It was really delicious. Though there are several steps to this, it’s relatively easy. The low and slow cooking really does all the work for you and creates great flavor, tender meat, and perfectly soft vegetables. I highly encourage you to give this a shot!