I love Italian food and I love spicy and this is a great combination of the two.  I looked up Fra Diavolo and the not always wise internet says that it translates to “brother devil”.  I knew of the devil part in reference to its spiciness, but am not sure about the brother part, but sure we will go with it.  I served this over pasta with shrimp, but like many Italian sauces, once made it is very versatile and could be used in many different ways.

These were the foundation of the sauce, a large can of crushed tomato, a large can of tomato puree, and 2 cans of tomato paste.  I guess I could have really been hard core and stewed, crushed, pureed, and….pasted the tomatoes myself but this is a corner cut that I think most kitchens wouldn’t look down upon too much.  They are interesting, not everyday brands, that counts for something right?  I opened these ingredients and poured them into a slow cooker then added the fresh oregano and basil.

The natural lighting on a wintery day helped to further the illusion of fresh summery herbs.  It is great that we can get basically whatever produce we want at anytime of the year, and these were fresh just not from my garden.  Stan’s Market in the strip always has fresh herbs for $1.50 a bunch which again shows how ridiculously overpriced mainstream super markets are.  Next garlic (I have been obsessed with roasted garlic recently), and onions. 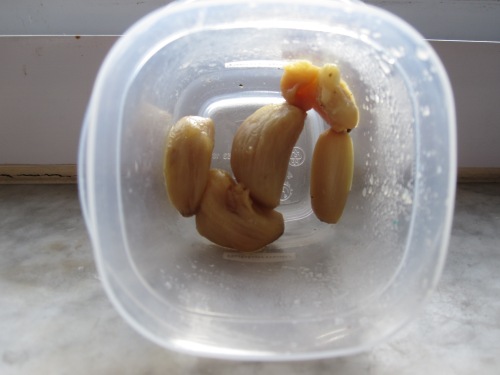 I added a tablespoon of red pepper flakes, stirred, and let the slow cooking do it’s magic for about 4 hours.  You may be thinking that a tablespoon of red pepper flakes is a lot because, well it is.  I have a taste that has been described as aggressive before and I really wanted the heat of this sauce to come through and it did in a very nice way.  There was a strong late rush of the heat but it was intertwined with the sauce in a way that it was extremely noticeable but not overwhelming.  Adding the cream to the sauce later on helped to govern the heat. 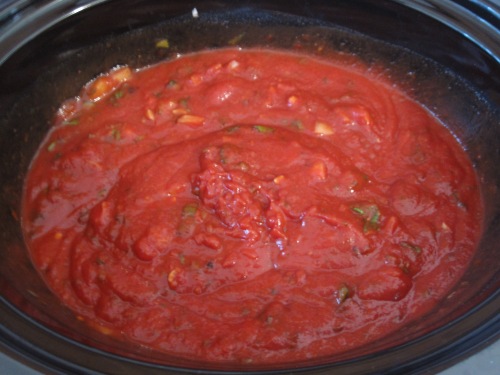 Everything is cold at this point and I placed the lid on the crock pot, hit the low/8 hour button, and let the sauce come together for about 4 hours with a few stirs here and there.  After those 4 hours, the sauce did not look a whole lot different at first glance but tasted much different.

We couldn’t come up with a way to describe how the above sauce looks, but it looks like it does when it comes out of a jar.  It is…..smoothly textured if you are into contradictions.  Anyway, the sauce could have simmered longer, but I would suggest a minimum of 2 hours if you are going to use the slow cooking method and give it the occasional stir no matter how long.  We were about an hour away from serving, so I added the cream at this point and mixed it in.

I served this with shrimp over pasta for some old Pittsburgh friends that were visiting for the holidays from Japan where they have been living for the last 7 years or so.  I took some pics of the final dish but I guess I was rushed and excited for our company and they did not come out well and I did not notice until it was way too late.  I added raw shrimp to the sauce about 10-15 minutes before serving it and with a few stirs they cooked easily.  The sauce was so hot that it was not a problem for the shrimp to cook.  Don’t let them in there too long though so they don’t become too rubbery.  Though I don’t have the final product pic, this sauce is very versatile and could be used on pizza, calzones, as a dipping sauce, in lasagna, basically anything you would use a red sauce for!