This was another dish we made for our Christmas feast. I had some leftover marscapone from the stuffed mushrooms I made and thought I’d try to use it to make creamed spinach. As if creamed spinach needs to be more decadent?! It worked out well and everyone loved the spinach.

I used fresh spinach, stems and all. I wilted it down, cooking it over medium heat with some salt. Once it was wilted, I removed it from the pot and let it drain in a colander. I pressed out as much liquid as I could using a potato masher and chopped it up.

Now on to the creamy sauce. mmm….

It all begins with some butter. Melt the butter in the pot (same one I used to cook the spinach) and add garlic and some seasonings.

Add the marscapone and let that melt and incorporate into the butter.

It creates a nice, thick, creamy sauce. I added some half and half to “lighten” it up some.

Add the spinach to the cream sauce.

Once it’s all combined, transfer it to a small baking dish and top with parmesan cheese. 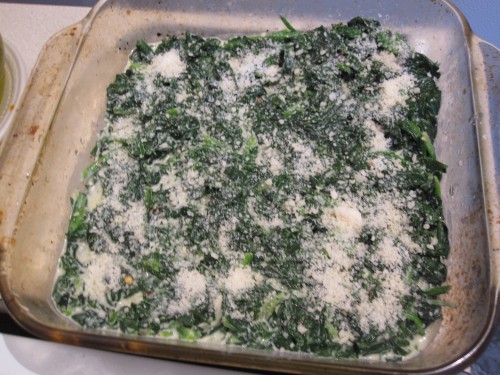 Bake for about ten minutes or until its bubbling.

I bake it so the spinach can absorb more of the liquid, but it’s definitely an optional step. You can continue to cook it over the heat in the pot too.

This was a decadent side dish, which we paired with filet mignon. Steak and creamed spinach is a phenomenal combination and it also goes well with pretty much anything else too. Everyone loves this one.

One response to “Marscapone Creamed Spinach”