This is our first Kittened dish in Pittsburgh and we have been discovering that food is very cheap.  This was a 9lb cut of brisket for $30, and that was not a sale.  Plenty more to come on the great deals found.  I smoked this similarly to the pork shoulder a bit back.  Slow cooked over indirect heat, but this time it was cooked as the debut dish on our new charcoal grill that we got for our wedding (thanks Mo and Stosh).

First to prep the rub

Started with a quick made rub.

As similar to the pork, I started the grill with a large pile of charcoal and once it was ashed and ready, it was moved and kept to one side.  I also used a store bought foil baking dish as a drip tray below the meat to limit the mess and possible flare up. 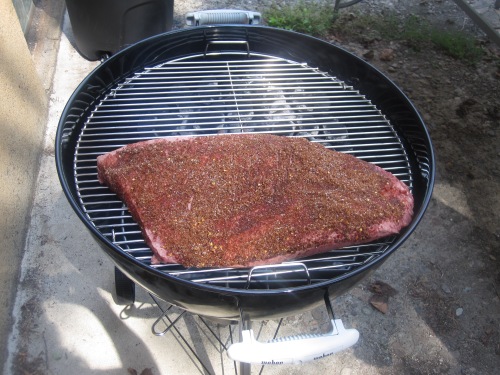 Now a lot of waiting.  The grill was covered with the below air intake about halfway open and the lid air intake also about halfway open.  The lid intake was placed over the meat, opposite the coals so that the heat and smoke are forced to go around the meat in order to escape.  The brisket cooked for about 5 hours total.  Here is is about halfway through.  I turned it about every hour to alternate the side facing the heat. 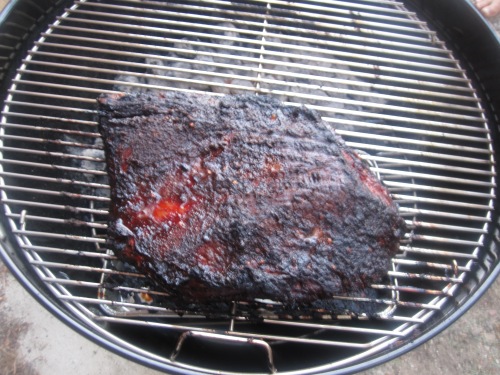 And after all five hours.

Allow the meat to sit for 15 minutes or so before slicing and always slice against the grain.  It would be great to have a deli slicer here, but that is a bit excessive!

Hey guys, Eileen here. I am going to fill you in on the sides, which I was responsible for making.

In addition to the brisket, we served a simple horseradish sauce from all recipes (sorry, no pictures of it) and a broccoli slaw from Smitten Kitchen. I have made this broccoli slaw once before for a cook out and people seemed to like it. I decided to make it again, figuring it would be a nice complement to the meat and tangy horseradish sauce.

First, I made the dressing for the slaw, which is composed of buttermilk, mayonnaise, cider vinegar, sugar and shallots.

Give it a good whisk and set aside. 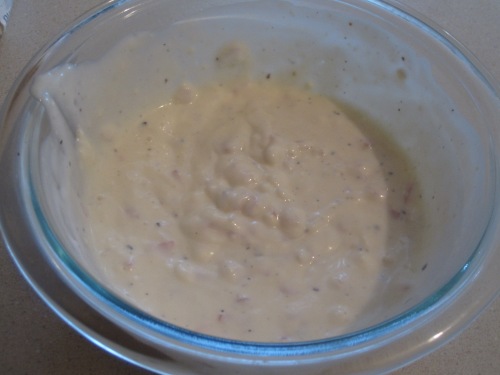 Next, it is time for the broccoli. I used the slicing blade on my food processor to cut the broccoli for me. This method is a major time saver and produces pretty uniform slices of broccoli. Here it is pictured with chopped red onion as well.

To this, I added dried cranberries and sliced almonds and eventually the dressing.

Give it all a good stir and let it sit in the fridge for an hour or so before serving. 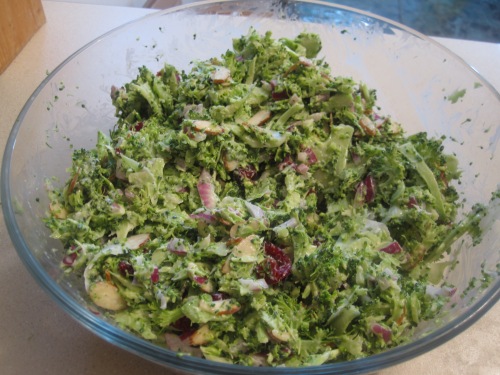 It’s a great slaw and a bit different than your typical cabbage slaw. If you are looking for something new to have or bring to an event this could be it! The crunch of the broccoli with the tartness of the cranberries and the sharpness of the red onion are all tamed by the buttermilk sauce. It was a great compliment to the brisket too!

All in all, this meal was delicious! We were very happy with the final product and our guests seemed to be too.