Good ol cliche Pad Thai.  What can I say, it is darn good despite being the most cliche and possibly Americanized Asian dish.  Eileen is much more skilled in Asian cuisine (Curry is one of her specialties) than I am but I was inspired to give this old favorite a try.  I looked up some recipes and sort of used them as a basis and tailored it to my taste.

I have had trouble with rice stick and other Asian noodles in the past.  Sometimes the directions are not translated well or even translated at all.  The main problem has been getting the noodles consistently soft enough without overcooking them.  These are the dry noodles in a bowl with boiling water from a teapot poured over them.  They sat in the water while I made the sauce and scallops.  Onto the sauce which started by sauteing garlic and ginger in chili oil, sesame oil, soy sauce, rice wine vinegar, and fish sauce.

The sauce was basically done at that point and I coated the noodles with the sauce.

In the meantime, I seared the well dried and salted and peppered scallops.

Now it was time to assemble.  I turned the heat off on the noodles and mixed in fresh bean sprouts.  I didn’t want them to cook much and keep a bit of a crunch.

The rest of the toppings were prepped.  Crushed peanuts, which we shelled and crushed by hand, chopped cilantro, green onion, Thai basil and fresh sliced lime. 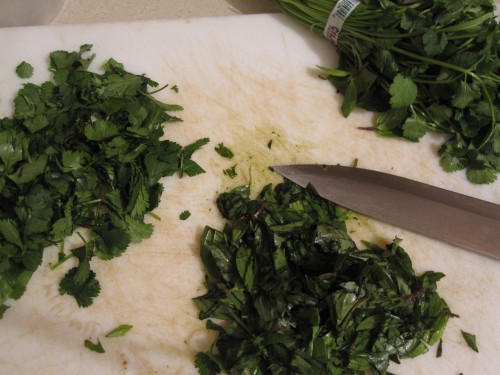 Then the final assembly of noodles and sprouts topped with seared scallops and the rest of the garnishes served around the bowl then mixed in.