I was looking to grill something a little different since I had the time on a Sunday and it can be easy to fall into ruts in all aspects of cooking.  I decided to grill pit beef for sandwiches and used a method I was unfamiliar with.  This is basically a grilled roasted beef sandwich, which I thought would be indirect heat slow cooked but instead was directly cooked over the grill in a rather short period with much close attention to the grilling.

This was an eye of round cut, top round could also have been used.  Trim any large and visible fat and season to your liking.  I used salt, pepper, garlic, and cayenne.

To cook the meat, prepare a medium hot grill and place the beef right over the coals.  Then don’t go too far and turn the meat about every 3 minutes or so until it is well crusted on all sides and cooked through.  I cooked mine for about 45-50 minutes and then let the meat rest for another 10-15.  I was aiming for a medium rare, but after continuing to cook while resting the meat was a solid medium.  It seemed as if the temperature was really low for so long and then just shot up towards where I wanted it and kept going over.  So keep that in mind and take the meat off about 10-15 degrees before you would like it to be done.

The outside will cook and sear quickly, but remember to turn often to cook through

Make sure to get all sides cooked evenly

This is right before I took the meat off the grill

After the cooling session, I tried to slice the meat as thin as possible like lunchmeat but it is difficult to do by hand.  This was again one of the times I wished that I had an industrial lunchmeat slicer, but know deep down that it is for the best that I do not. 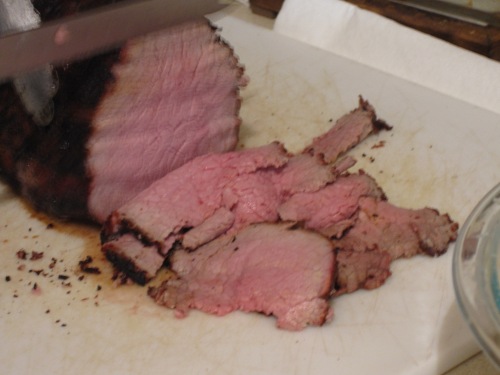 It wasn’t too thick but it would have been best if the meat were paper thin and piled high!  We made a simple sauce of mayo, some seasonings, and horseradish and made sandwiches with the usual toppings.

One response to “Grilled Pit Beef”