Ok. I know this title is a little much, but I assure you they won’t all be this awesome. Just kidding… I just couldn’t resist. This Saturday was pretty great though. We woke up after a good night’s sleep, which is always much needed after the work week. We spent much of the day hanging out and got in an episode of Big Love before football came on. It’s freezing outside so I decided to make broccoli cheddar soup for dinner, using this recipe from CDKitchen.com, which attempts to mimic Panera’s version.

This recipe came out great! The last time I made it, I tried the whole pureeing thing. I really didn’t like the consistency of it, as the tiny bits of broccoli gave it an odd texture. This time around, I cut up the broccoli into really tiny pieces and did not puree it. This left the soup velvety and thick. I think it was very similar to Panera’s version and it was delicious! Next time, if I add chicken again, I will probably make the broth a little thinner by adding another cup of chicken stock and another cup of half and half so it will be more soupy. With the chicken and all the veggies it was pretty thick, but still really good and overall, pretty easy! 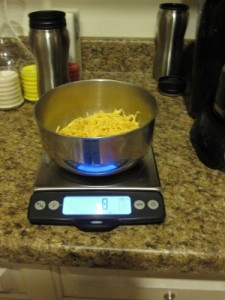 Check out my new food scale! 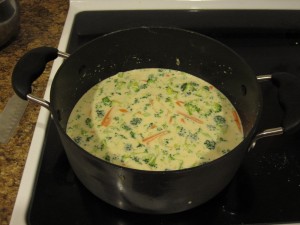 I forgot to take a picture of it once it was served, but here it is in the pot almost finished

One response to “Souper Saturday”