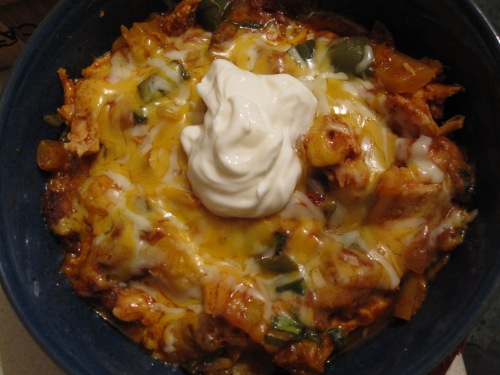 What to do when you want chicken enchiladas but you don’t have any tortillas? Make this and you won’t even miss ’em! This is all the good stuff of the chicken enchiladas you know and love without all the needless filler of tortillas. You’re probably a little unsure right now about not using tortillas… which is very understandable.  I’m here to tell you that we really enjoyed this a lot and realized that the tortillas were never really that necessary after all.  Maybe you’ll agree.

So, historically when I have made my enchiladas I used store-bought, canned enchilada sauce. For this dish, I decided to make my own sauce and lo and behold, it was so much better than canned. Of course, right?! I was kind of hoping it wouldn’t make a difference so I wouldn’t have to do this step every time now, but of course the homemade fresh sauce was far superior to shelf stable stuff. It didn’t take that much more time and I do recommend it if you can swing it. If not, the canned will work just fine 🙂

Like so many of the recipes we make here, we begin with onion. This is the base for the enchilada sauce along with several different spices and of course, tomato sauce.

It simmers for 8 minutes and it’s done. Not too bad.

I baked the chicken and once it was cooked I shredded it. 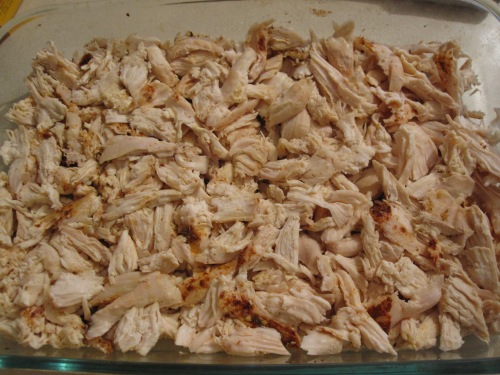 The chicken forms the base layer of the bake.

Next, saute some peppers and onions, until they are starting to get soft. They will continue cooking in the oven so cook them to about 60% soft. 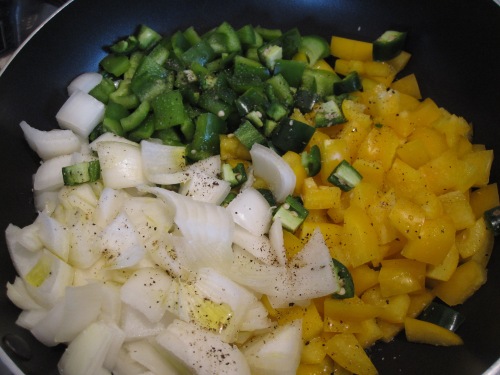 Once they are cooked, spread them over the chicken and top with the enchilada sauce. 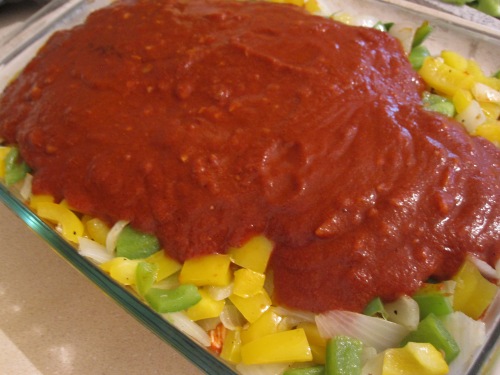 Cover with shredded cheddar cheese and some sliced green onion.

Bake it until it’s all nice and bubbly, melty and gooey (all technical terms).

and that’s about it. Pretty simple and yet so satisfying!

The home made enchilada sauce was nice and robust. The chicken can dry out a little so you may opt to use dark meat. I used boneless, skinless chicken breasts so I was not surprised by the texture, but this can be adjusted for. You can add whatever you want to this in place or in addition to the pepper and onions. It was also great as leftovers. We topped ours with sour cream. Sliced avocado would also be awesome I’m sure.

Overall, it was a nice tasty weeknight meal.