You may have never noticed this place as it is in a little strip mall behind what used to be a bank (and is now an urgent care) and a gas station. It’s behind and to the right of the strip mall that houses continental subs and pizza, if you are familiar with that (if you are not familiar with that, you should be!). Anyway, Hong Kong, has pretty good, reliable Chinese food and on Sunday they have a “family buffet”. Now, it’s important to note that this is not your typical buffet where in the center of the restaurant there are large trays of food that you pick from. No, not here. This “buffet” is really food served family style, meaning that as you finish a dish, they will bring you more of the same. Each person gets tea, their choice of soup and an egg roll. They brought Greg and I three entrees- one chicken, one beef and one shrimp. We were simply told what they were and there was no choice in that department. Luckily, we were fine with just about anything they could have brought.

When we walked in we were the only customers in the restaurant. The decor is a mix of old and new and the waitress was a bit odd, but whatever. We were promptly served tea and crunchy noodles with duck sauce, mmm. (Pictures are from the iphone- sorry!)

and then like five seconds later we got our soups. I got hot and sour and Greg got wonton.I usually judge a Chinese place on their hot and sour soup. This soup was solidly good. Nothing to go crazy over, but good, standard hot and sour. 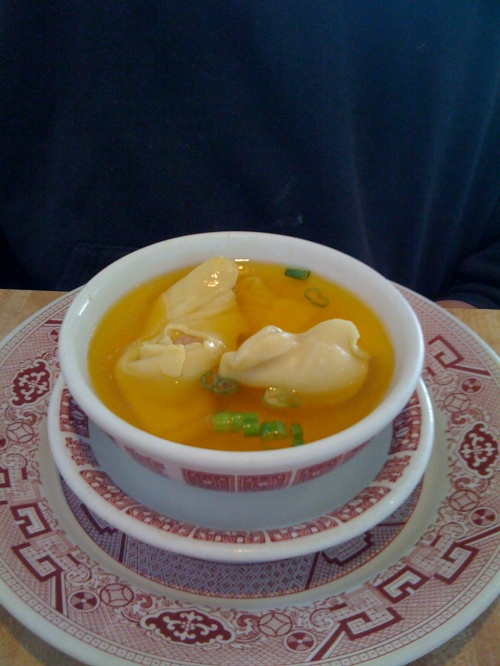 Next, came our entrees.

More specifically, we got shrimp with vegetables, Hunan chicken, and beef with broccoli (I think). 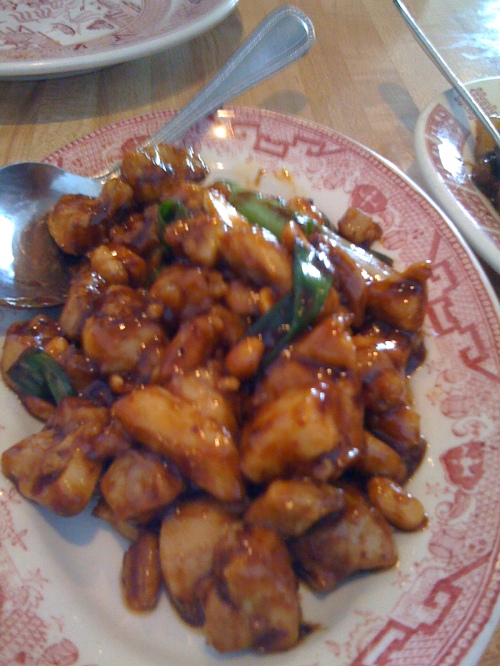 Of the three dishes, ironically the chicken was the best! Usually I don’t order chicken when I am out because I eat so much of it at home. This dish was really excellent though and it was the only one we forced ourselves to finish so we could get another serving of it. It was really tough, let me tell you.  The beef and shrimp were pretty standard really. I can’t remember the exact pricing, but this deal is quite a steal. This place also delivers and we have had pretty good success with them. Again, it’s not gonna rock your world, but it should satisfy your Chinese food cravings!