This one’s for you Jeremy! I decided to make a pasta-less lasagna to please one of our biggest supporters, who had requested a lasagna recipe. Just for the record, this recipe could easily be duplicated with actual lasagna noodles in place of the eggplant. Though, I have to say this is a nice alternative if you like eggplant like me. In the past I have sometimes struggled to make tasty eggplant dishes at home, as sometimes the eggplant can be bitter, the skin off-putting, and the seeds crunchy and irritating. Since I like eggplant so much though, I have continued to try to make it and feel that this dish was a success.

I began by slicing the eggplant as thin as I could. I worked with a sharp knife and took my time. A mandolin probably would have worked a lot better in terms of getting consistency in thickness, but I don’t have one of those so I did the best I could.

I placed the eggplant slices on racks (two from my toaster oven) and the remaining pieces on a paper towel. I generously covered them in kosher salt and let them sit for about an hour. 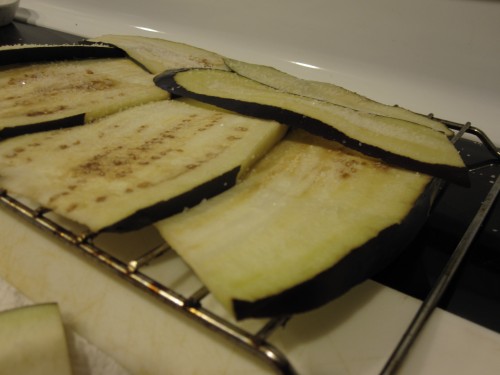 The salt pulls out the bitter juices (remember what salt does to cells? wahoo, high school chemistry!), which I rinsed off along with the salt.

Next, I wanted to cook the eggplant a little bit so it wouldn’t make the dish too soupy. I used a grill pan, which I coated generously with olive oil so the slices wouldn’t stick. I seasoned about 1/2 of the slices with salt and pepper as they cooked. They only needed about 2-3 minutes per side, depending on the thickness. This left some beautiful grill marks! 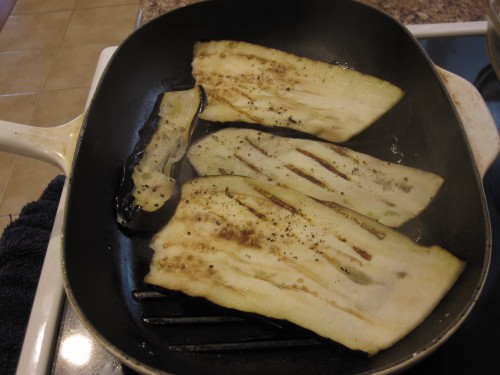 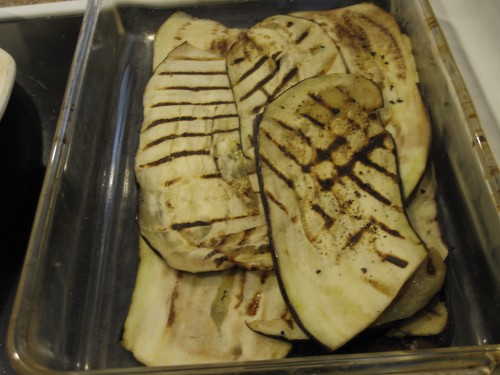 I also grilled up some baby bellas for some extra filler and added veggie-ness.

As the grilling went on, I also made my ricotta filling. I LOVE ricotta and always use it when making lasagna. Some people have told me about using cottage cheese, but I’ve never tried it. I usually buy part-skim ricotta and it’s delicious. To the ricotta, I added an egg, some fresh garlic and parsley, salt and pepper and some chili flakes for a little kick.

Alright. Now it’s time to assemble the lasagna. If you want to go the traditional route using lasagna noodles, cook the noodles according to the directions on the box. In this recipe when you see eggplant slices, substitute that for the lasagna noodles. Easy as pie.

Step 1: Layer the bottom of the pan with tomato sauce. I used the leftover marinara that I made several weeks ago, but store bought is fine too.

Step 2: On top of the sauce, create a layer of eggplant slices.

Step 4: I threw the mushrooms on at this point. If you wanted to add meat or other veggies, you could add them here.

Step 6: Add another layer of sauce.

Step 7: And then a layer of cheese.

That’s about it for the assembly of it

After it bakes it’s all cheesy/melty/gooey so let it sit before cutting it.

I couldn’t wait that long, so it was a little goopey, but still delicious! 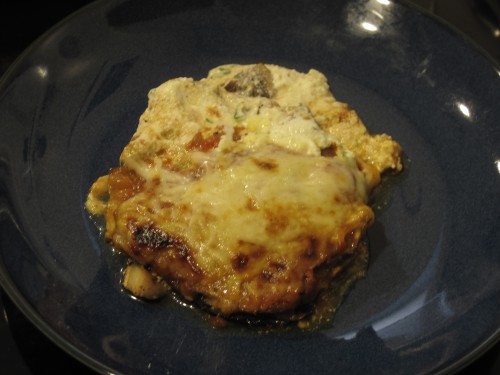 Recipe for our basic marinara